Charlie was our first rescue dog. 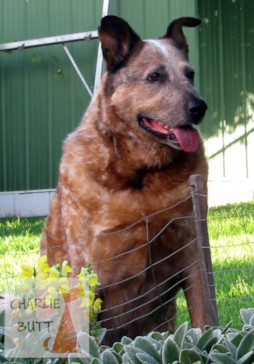 e was, we were assured, a cattle dog pup. When he gained 9 kilos in his first week with us, we weren’t so sure they were telling the truth.

He had a magnificent red speckled double coat. He shed like someone had shorn a sheep in the loungeroom. He had a mane like a lion. He was a 55kilo pussy cat. We adored him.

Charlie was home. He wasn’t going anywhere. The kids loved climbing all over him and then letting him rest in their laps on the lounge until Mum could lift him off so they wouldn’t suffocate.

He was our best friend, protector, cuddle bunny, swimming pool life-guard, bed hog and farting champion. He was also in great pain with hips problems, like many huge breed dogs.

Charlie’s great joy was life itself. His people and his dog friends were very important to him. We agreed to foster a young chubby pup, and Charlie took on the job of training the little fellow and teaching him to dog. Charlie actually mourned his moving on, after Xavier was adopted.

We kept taking on new fosters just so Charlie could continue his role as “boss daddy”. He did a marvellous job!

We miss him every day.